Invantive Cloud provides a shared service for reporting, analysis and data exchange. To ensure proper operations and acceptable costs, limits are posed on the actual use. Excessive amounts of data downloaded reduce the effectiveness of the platform and require more time to process on for instance the Power BI service. Various other techniques to reduce the total amount of downloads across a calendar day, as well as techniques to reduce the download size of an individual data set are presented in the overview.

As explained in the section “Measurement”, limiting the number of columns for which data is retrieved can decrease (compressed) download size by a factor 3. Higher and lower factors are possible, depending on the properties of the data. The uncompressed data volume was found to be decreasable by a factor 16, yielding measurable reduction of the Microsoft Power BI processing time.

To exclude columns from your data set in Power BI Desktop:

To measure the impact of solely selecting the needed columns, a test case was prepared using financial data from approximately 200 small test companies on Exact Onlineusing the table TransactionLinesIncremental. The table TransactionLinesIncremental contains approximately 215.000 Exact Online journal entry lines. The data distribution is similar to that of other data sources for financial control.

All tests were executed twice to allow the data to load in the OData4 cache before serving them to Power BI.

The associated Power BI query is:

The full data set used in the test has a network size of 15 MB (15,044,436 bytes to be exact, compressed) and an uncompressed size of 244.815 KB. The data set was downloaded from the Invantive Bridge Online OData cache in approximately 27 seconds by Power BI on a high-performance HP workstation, including processing, over a 250 Mb link.

Previous measurements on Invantive Bridge Online have shown that the cumulative throughput can easily exceed 5 Gb, so Power BI Desktop seems to be the limiting factor in processing the 244 MB of JSON data transported through OData.

A separate test was run to establish whether Power BI was indeed the limiting factor. The following statement was executed to simulate the download:

The download of 244 MB using curl takes consistently 14 seconds, which is sufficient to saturate a 140 Mb network link. Instead Power BI seems to be the slowest link in the chain. 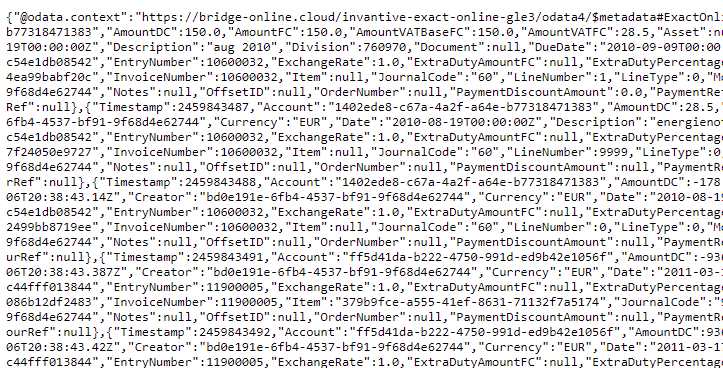 Using the step “Remove Other Columns”, all columns except Timestamp were removed.

The request also includes the ID column, which is deemed necessary by Power BI Desktop.

The associated query is:

The download size of this data set with solely the ID and Timestamp columns is 5 MB (5,571,914 bytes to be exact, compressed) and - according to Power BI - an uncompressed size of 14.669 KB. The data set was downloaded from the Bridge Online cache in approximately 6 seconds. 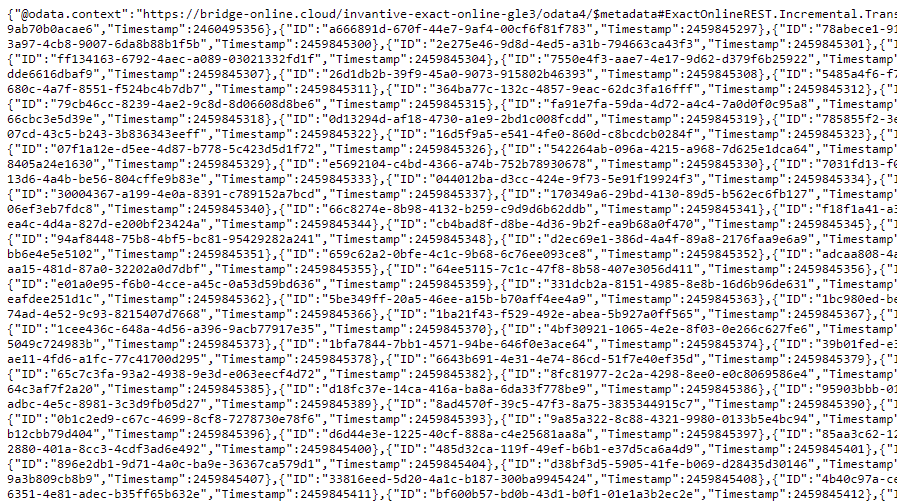 There is no superfluous data in the limited width download. The uniqueness of the data fetched limits the compression ratio. Nonetheless, reducing the number of columns fetched can reduce the data volume sufficiently to apply this technique, especially when the content skipped is little compressible.