The Invantive status page provides an overview of the status of most Invantive services. An abbreviated view can be seen in the top right corner of the forums in the form of a traffic light. The status page with all details opens by clicking on the traffic light or by navigating to https://status.invantive.com.

Effective December 1, 2021, the status page has been expanded to include eight graphs that provide an insight into the variations over time of:

The time display is in UTC. UTC is currently 1 hour earlier than the Netherlands (December 1, 2021) and sometimes 2 hours earlier depending on daylight saving time/winter time.

The figures are updated every hour after the end of the full hour. The situation for the previous hour is then determined and shown. In some cases also the expected situation for the current measurement period time is already shown.

Exact Online is the only platform included separately because around 60% of the users work with it.

From December 1, 2021, the figures have been measured continuously. Based on historical figures, the four weeks prior have been provided with measurements as accurately as possible.

The download speed of the platforms is without compression. The actual speed can also be significantly higher here because, for example, separate partitions (administrations on Yuki, Exact Online and Twinfield) are accessed simultaneously and multiple downloads take place simultaneously on the same partition.

The absolute numbers don’t say convey the whole story; a speed of 400 KB/sec per stream compressed as in the image below says little when the actual total processing in Power BI is 32 MB/sec. However, variations along the time axis do indicate trends.

For example, large spikes around midnight indicate that relatively fast and massive downloads occur then:

The measurements about the Exact Online APIs fall into four components:

All measurements about the Exact Online status are based on anonymized end-to-end measurements on network devices running Invantive SQL in combination with Exact Online. This concerns large numbers of Windows servers, PCs, Apple Macs and Linux servers in mainly Western Europe with a wide distribution in terms of available bandwidth and network latency.

The first three measurements concern the so-called 95-percentile. This is slightly different from the average response time. Because response times cannot be negative, are limited at the top by a timeout and occasionally large outliers upwards are possible, an average and/or standard deviation of the response time is a less meaningful value.

Agreements often choose to work with a limit value within which a measurement must fall in a percentage of cases, for example that a web page is built within 2.5 seconds in 95% of cases. The 95 percentile is arbitrarily chosen based on experience with Service Level Agreements. For example, the Google Core Web Vitals use the 75 percentile to represent the performance.

In general, a response time to an Exact Online API of more than 10 seconds will be unacceptably long, especially for data that an interactive user is waiting for. And again, variations along the time axis indicate trends.

For example, in the graph below, it can be seen in the top image that fetching a page with 1,000 rows via the Exact Online sync APIs fluctuates greatly in terms of response times, with roughly 1 second being the lower limit. For partial pages, the situation changes more dramatically over the course of the day, as can be seen by the relatively high peak around 10 am: 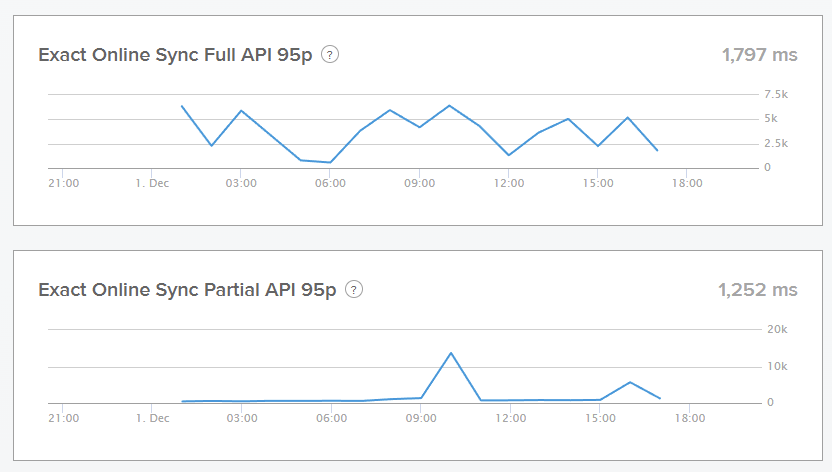 The reliability of receiving a response to an Exact Online API request is also measured over time.

Reliability varies widely, from 10% failed requests to one in a million. Therefore, reliability is expressed on a logarithmic scale: a step up on reliability means a 10x lower chance of a failed API request.

Failure of an Exact Online API request can be anything and are all heavily weighted in terms of status, such as:

Note that the reliability is the end-to-end reliability: from the requesting device via the Internet to the Exact Online company data and completely back. So the reliability also depends on local conditions. When the national KPN-Internet is down for 2 minutes, most users of Invantive SQL software will not notice this because of the automatic error correction, but the number of failed API requests will go through the roof.

For incidents on components, it is possible to stay informed of outages for free via email and SMS. Please use the “Subscribe” button to do so.

Currently it is not possible to be automatically notified when Invantive Cloud or Exact Online is working slowly. In case this persists an Invantive employee will have to assess this manually and turn it into an incident.

How do I create an Exact Online API interface?