Good morning
I have a question, something is unclear how query SQL behaves:

with 588K records in the table, Query Tool takes 22 seconds to print the result: 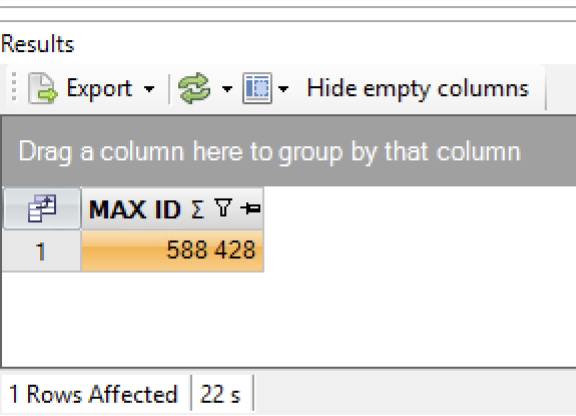 with 588K records in the table, Query Tool takes 23 seconds to print the result.

It seems that both statement are not passing the MAX nor the ORDER BY to the SQL Server data container on @sql, instead loading all the records and doing the operation Query Tool side, not SQL server side.

Invantive SQL currently does neither forward group functions like max nor order by to the data container. This also holds for the next release of the Invantive SQL engine, which focuses on optimization technologies.

In theory it is possible to forward group functions and the sorting to the data container, but given insufficient market demand we have not created it (yet).

A workaround is to use native SQL such as:

Disadvantage is that this approach requires knowledge of the syntax of the data container’s native platform. Advantage is that it allows access to almost all native optimization techniques available, including platform-specific hints.

For example, the following Invantive SQL query on a large table take 2.7 seconds: