With Exact Online increasingly tightening resource usage for APIs, it is essential to monitor actual usage.

The following query provides an overview per Exact Online company (“division”) of the remaining daily API calls across all sessions, as well as the uncompressed amount of data transported during the current session.

The first statement use selects all Exact Online companies. You might want to select specific companies as a comma-separated list.

The second statement select triggers a short API request for each Exact Online company to retrieve at most one unique journal. This API request returns the current maximum and remaining number of daily and minutely API calls, including rate limit reset times.

The third statement select is the actual report. It collect for all divisions (each division is a partition) the remaining daily calls as well as the approximate number of uncompressed data transported between the Exact Online API clusters and the client. 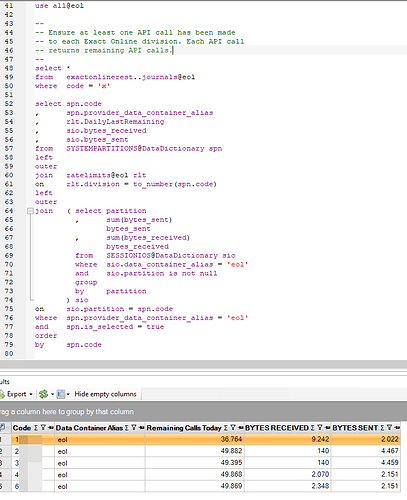