The following statement is an incremental update, switching all registered accounts to receive both a PDF as well as XML invoice:

The typical runtime is less than a second, since due to the incremental behaviour only few records will be selected. The typical API consumption is one API-call to retrieve the records and one API-call for each record to be updated.

When mandatory filtering on Exact Online is activated, an error will occur such as:

or on older releases:

The implementation of mandatory filtering leaves room for improvements. In this case, the InvoiceAttachmentType was not included as a sufficient filter. Even worse, without mandatory filtering it could be used as a filter and could be very selective since being contained in the base table: 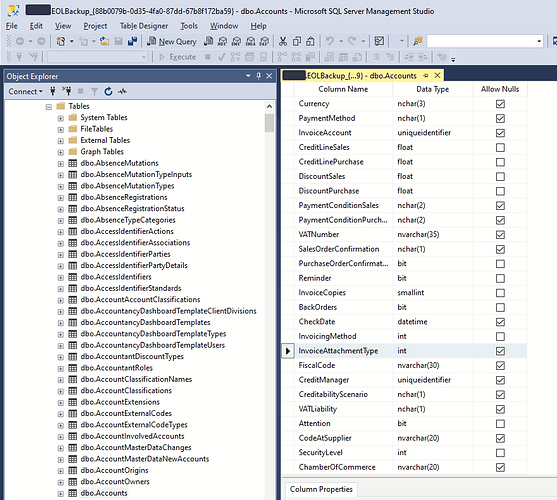 In a future release of Invantive SQL a workaround will be implemented. This might take the form of disabling server-side filtering altogether for columns that could previously be used for optimal performance.

For now, you can use one of the following two alternatives to cope with mandatory filtering on Exact Online.

Combine Use of Exact Online sync API and traditional API

First alternative is to offload processing to the client software using the sync APIs and combining the selection with individual update statements as previously. Using individual update statements does not introduce extra processing time since Exact Online does not support the bulk update specification of OData. The processing requirements locally will grow somewhat because the sync APIs require an update, while in the original query the SQL Server of Exact Online filtered the data.

The resulting code becomes either in PSQL:

Note the use of the low_cost SQL-hint. Otherwise still an itgeneor330 will occur, since the AccountsIncremental is not yet considered a low-cost table which enables early evaluation in query execution.

Using this fact, an optimistic approach would be to use:

Since Created is a mandatory column with a lower-bound well above 1970, this filter should work. The resulting API call is:

However, mandatory filtering no longer accepts this filter due to a bug as described above. By rewriting the query to not exclude the filter on InvoiceAttachmentType mandatory filtering from the server-side filter, the Exact Online API can be tricked into accepting the statement:

The last statement has a significant downside: it generates hundreds of API calls like:

and performs the few necessary updates at the end. This alternative implementation can easily take more than hundred times longer to run and consumes hundreds of API calls compared to the single API call of the original statement without mandatory filtering and the variant using a for loop.

The recommended solution when confronted with mandatory filtering is to switch to the for loop implementation.

More relevant topics on mandatory filtering on Exact Online are: