From my own experience, after I upgraded to 22.0.341, it worked this morning a few times :
I relaunched my scripts, they connect/calls Exact Online four times. Three of them worked, the last one not.

Now I get this error with QueryToool, but not all the time 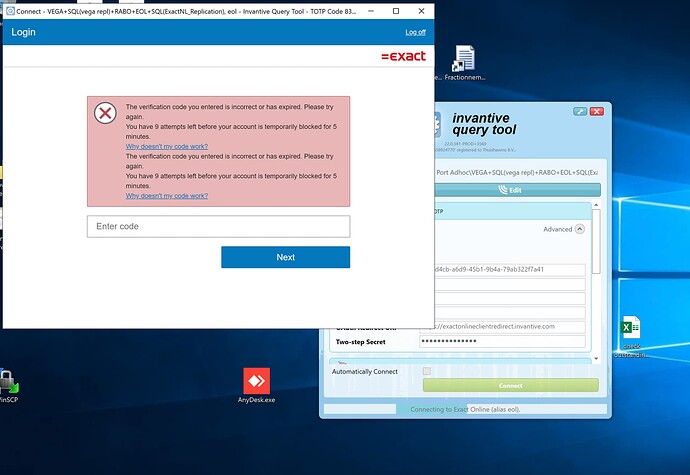 [Note that the same error is given twice]

The workaround I use at this moment in steps:

Wait again for fast publication of a new fix from Invantive

Well, I did the same.

Once I manually entered the code from my Authenticator app, then I closed Query Tool and reopened again, then the automated implicit grant flow worked again.

Not sure if the manual entry corrected something or Exact is doing some A/B testing.

I hope that the automatic repair works for me too.
The last code I entered was 14 minutes ago.

I just saw a renewal in the Query Tool of authentication full automatic in progress, this is hopeful.

This error seems related to some new infrastructure on side of Exact Online. Subscribe to the following incident in order to be updated about this issue:

We have found that the issue is consistently reproducible without Invantive software.

The following error message is shown, even before a MFA-code is requested:

The verification code you entered is incorrect or has expired.
Please try again.
You have 10 attempts left before your account is temporarily blocked for 5 minutes.
Why doesn’t my code work?

The number “10” in the error clearly indicates no invalid MFA password has been provided yet, since all 10 attempts are still available.

The first occurrence was:

The changes on the Exact Online log on leading to itgenobr113 errors do not have the same cause, although they are probably related. The itgenobr113 started September 7. It seems various changes are taken into production over time.

I just found out, that the Exact Online log on dialog screen pops-up completely at random for me.

That is correct. It seems that one out of approximately 10 log ons now fails. For users controlling the database connection through an interactive program such as Invantive Query Tool or Invantive Control for Excel, they just enter the verification code in the Microsoft Edge-control. For non-interactive use, the job fails.

The issue is constrained to interactive on-premises products and especially harms production use of Invantive Data Hub and Invantive Data Replicator, depending on the set up. There are no issues on Invantive Cloud.

Currently we are working on a workaround for the Exact Online bug to retry the log on to Exact Online under these specific conditions. We are assuming that with one out of 10 tries failing and no relationship between the log ons, trying multiple times reduces the chances of connection problems considerably.

We are also hoping that Exact Online will fix the bug, but given the impact on large production sites and sometimes slow corrections we are working on the workaround. There are no foreseen challenges that hinder the creation of a viable workaround; it is just a matter of time.

For now, please repeatedly run your non-interactive jobs until they succeed. For instance, you could increase the frequency after checking the application logic.

In Belgium, the log on form again seems to be back to the original format this morning.

Exact Online development is now looking at the issue (ticket #03694454). The Exact Online log on problems with MFA verification code still occur randomly across a wide range of servers, platforms, Windows versions and browsers. Some users report a high frequency of occurring, whereas others see it once so often.

Recommendation remains for Data Hub users to re-run their jobs and/or run it interactively using the Invantive Query Tool.