Itgenlic186: You have declined the terms of the license

We are trying to activate a new license key we received a couple of days ago. It says the key is valid, but when we close the license window we get this error.

Thank you for evaluating our license. You have declined the terms of the license. Invantive Compositon for Word will be disabled.

It is not a known problem.

To assist you some additional information is needed.

Is it possible to add a full screenshot of the error plus the text displayed as “Details” as text as an answer?

Please see the screenshot of the message. 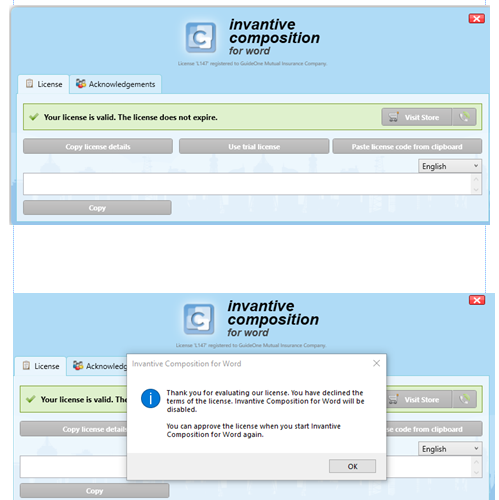 General recommendation is to upgrade the release of Invantive Composition for Word. The release shown is no longer actively supported.

The message shown is in new releases identified by the message code itgenlic186 (itgenlic187 on non-Office products). The message is in recent releases shown when the “Agree” button on the bottom right is selected. This button seems to be missing in the screen print.

It is possible that the license key used is not compatible with your release of Invantive Composition for Word.

It contains all keys dating back to 2014. Sort on the column “Generated” to find an old and active key.