Synchronize your Data with one Statement across multiple Applications

A global innovation on top of Invantive SQL enables one-statement synchronization (mono- as well as bi-directional) of reference data between applications. This note is the first of a series and explains the advantages, the concept and the grammar.

With the advent of apps, your business data has gotten distributed across multiple apps instead of all in one big ERP-system. Apps make your business agile and reduce your costs. Some of your data is stored only once in a specific app, but reference data such as projects, accounts and articles are typically stored and maintained in multiple apps. With business acquisitions, your business even gets more data sets which need to be synchronized for an optimal flow of your business processes and happy customers.

In a series of notes you will learn how based on a number of samples to effectively simplify your business processes for reduced costs and improved customer satisfaction. In this note we will introduce the new Invantive SQL feature for synchronization and analysis of data.

In a simple use case we will bi-directionally synchronize two overlapping data sets, each with some date range. 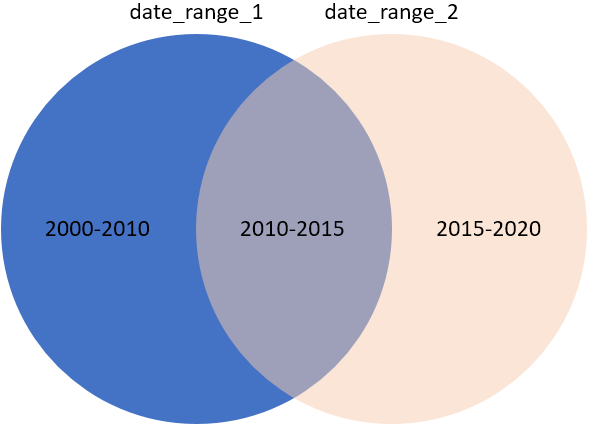 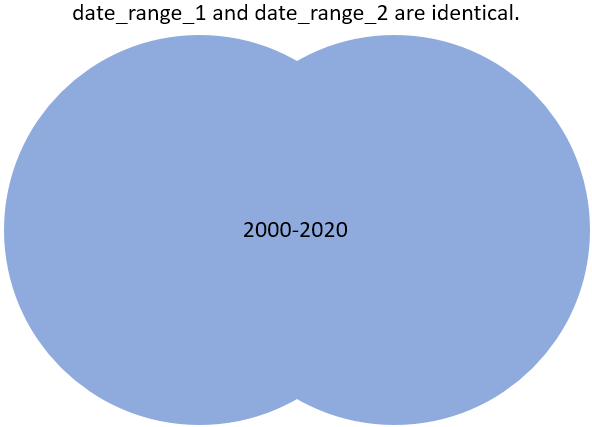 These two data sets will be set up in Invantive’s in-memory data container to work with:

The following SQL is used to set up these data sets:

These data sets are different, but a simple SQL statement will bi-directionally synchronize their contents:

The following SQL is used to synchronize the data sets:

That is all needed for a high-performance bi-directional synchronization across one or multiple apps!

The matching on rows in date_range_1 and date_range_2 occurs on the contents of the column day_date.

In this section I will introduce you to the new statements; future notes will show you samples how to synchronize data across data containers such as Exact Online and Outlook, Visma and Outlook and between Exact Online companies.

These new compare and synchronize statements provide one-directional and bi-directional analysis and alignment of data in two tables. It is an extended version of SQL statements like ‘upsert’ and ‘merge’ found in other SQL implementations, suitable for large volumes and high update frequencies typically found in large enterprises.

The grammar can be depicted as:

In an one-directional approach as specified by ‘FROM’ or ‘TO’, the compare and synchronize statement typically analyzes the differences between two tables with identically named columns, separating all differences in one out of four groups:

Rows in both tables are matched using the list of columns as specified by ‘IDENTIFIED BY’. Identifying column null contents are considered a specific value for matching; when both the source and target table have a null value, the rows will be matched.

After analysis, the differences can be filtered to only contain the type of operations specified using ‘WITH’ and then either be:

After analysis, the differences can be applied on the target table.

In a bi-directional approach, as specified by using the keyword ‘AND’ between the two table identifiers, deletes will not be returned from the analysis phase and replaced by inserts on the table which does not have the other table’s row. The determination of the target for an update is based upon the resolution preference as defined by the ‘RESOLVE’ clause. The ‘RESOLVE’ clause either defines to always apply updates to the left or right table as listed in their order using, respectively, ‘PREFER LEFT’ and ‘PREFER RIGHT’. Otherwise, the combined ordinal value of the columns listed in the ‘RESOLVE BY’ clause will be evaluated and the highest-ranking value is considered to be leading.