Go to Dutch version of this article

In the past consultants worked with Invantive Cloud with often a separate e-mail address per customer, or a complex procedure to change from customer to customer with the same login code. This made it difficult to work smoothly for multiple customers. Besides being impractical, it is also expensive: every change between environments involves time from consultant, customer and support.

With delegation on Invantive Cloud these disadvantages disappear while risk mitigating security measures are enforced through the automation of the process.

With the new feature delegation it is possible to grant third parties temporary access to your own environment. These third parties then log on to Invantive Cloud with their own account, but can switch to environments to which they have been granted rights through delegation.

In this topic you will learn how delegation works on Invantive Cloud.

The workflow for delegation consists of the following steps:

Delegation is granted based on email addresses in the “New Delegation” screen, available through the “Licensing” group from the left-side menu:

The “Delegations” screen is only accessible by superusers of an organization.

The third party must register or have already registered on Invantive Cloud under this email address. When the delegation is registered, an invitation to subscribe is also sent to the specified email address.

The maximum duration of delegation is three months from the date of entry. Delegation to service accounts is not possible; delegation can only be made to personal accounts.

A user who has received delegation will see a drop-down list at the top of the screen: 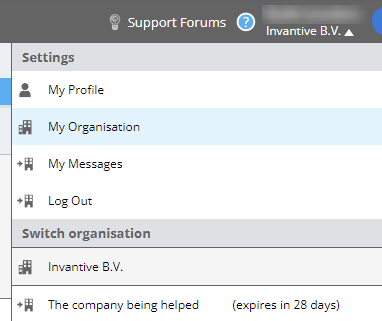 In this case the user is a member of its own organization (the so-called “real party”) Invantive BV. This can be recognized by the little building icon without the arrow. In addition, the user has been given access to “The company being helped”.

Frequently switching between organizations can be confusing and lead to usage errors. Therefore a clear bar is always shown at the top of the screen when another organization is used via delegation:

Third party usage via delegation is charged to the effective organization as if it were activity by a regular user.

PowerBI Service and other Services

It is not recommended to build automatic processing that uses a consultancy account based on delegation. At least error messages can occur because the consultant no longer has the delegation active; in a worst case scenario, a data breach can occur between two customers of a consultant.

Therefore, never use a consultant’s account to have Power BI reports refreshed, for example. Preferably use a service account for refreshing. A service account has few rights in the screens, but works fine for updating reports.